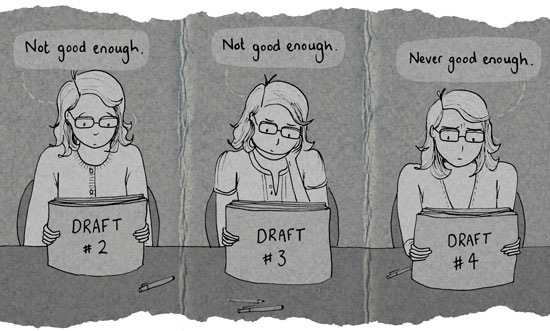 In truth I don’t know how many drafts I went through. Perhaps four or five of the entire book, but some sections were certainly reworked much more than that. Some sections have changed very little from that first draft, others are unrecognisable.

Perhaps I don’t need to tell you that I’m a perfectionist. It goes hand in hand with anorexia (though I’ve recovered from one, I’m not sure there’s any hope for the other). With that in mind, I’m sure you’ll understand that I was never going to feel ready. To go through one final draft and decide “That was it, it’s finished, now I’m ready to start drawing,” was never going to happen.

I know that’s how my brain works, but still, I was expecting the final draft to be more…done.

What decided the final draft, in the end, was time. I wanted this book to come out in 2013, the year I turn 30, and therefore I needed to set pen to paper in 2012. Or perhaps earlier than that, but it was 2012 already so that would have to do.