I felt really embarrassed by my first draft.

First of all, the drawings! People are often amazed when I say I knocked out a first draft in three weeks, but that was only possible with the most basic, gestural drawings. I was mostly only drawing for myself, and I knew which characters were which, so they had very few distinguishing features. It was really just about getting the bare minimum on paper to give the sense of the structure and pacing of a scene.  There was no point in spending any longer on what were, essentially, disposable drawings. I conveniently forgot I would have to show them
to one of the most prestigious publishers in the country! 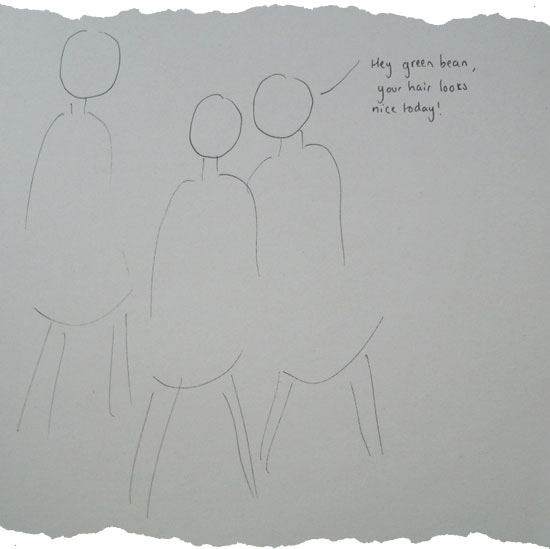 The best parts of it I could only just tolerate to read. For the most part it made me cringe. It was clumsy, obvious, clichéd and lacking the subtlety and emotional depth that I wanted to create. I sound like I’m berating myself and being incredibly harsh, but actually the process was just coming to accept that this is what a first draft has to be. As Graham Linehan said (in an interview for Charlie Brooker’s Screenwipe), the first draft is just toilet paper.

In addition to the (large) bits I felt were complete rubbish, there were the bits I left blank. So much of the story had been unbearable to sit with, I’d just about managed to get a sense of how long those scenes took in the story. I’d not been able to to plan to any extent beyond that, to even begin to draw what had happened. There were panels, pages, and even great chunks up to 14 pages long that had no drawings on at all.

So in February 2010 I sent Jonathan Cape 500 pages of work that made me cringe, and prepared myself for hearing feedback on work in such a raw state that I would never normally show it to anyone.